August 6, 2020
There are two excellent documentaries out about how Alex Jones used outright lies on his radio programs to 1) elect Trump and 2) to harm real US citizens.  Both films reference Jones' lie that the Sandy Hook school shooting was phony and that the grieving parents we all saw were just actors. Those real grieving parents were then targeted by Jones' listeners.
PBS Frontline has "United States of Conspiracy."
As the coronavirus pandemic continues, America reckons with racism and the 2020 election looms, “United States of Conspiracy” investigates how Jones and InfoWars, Stone, and Trump helped to lay the foundation for conspiracy theories to take center stage in America’s national conversation, how the idea of truth itself became part of America’s divide, and what it means for the future of our democracy.
https://youtu.be/AVjL5rUx3TM
Andrew Rossi's "After Truth" is a spellbinding film about how Jones' listeners act on his diatribes, featuring one man who Jones convinced that Hillary Clinton was running a child sex ring out of a DC pizza place. He was so incensed he shot an assault weapon into the family restaurant and inspected every nook and cranny only to find what we already know: there was nothing there.
https://www.amazon.com/gp/video/detail/amzn1.dv.gti.deb86b67-43d4-d5f4-3b42-b95ee97dc82b?ref_=imdbref_tt_wbr_pvc_hbo&tag=imdbtag_tt_wbr_pvc_hbo-20
This November, the real parents of those blessed lost children are bringing Jones to court. 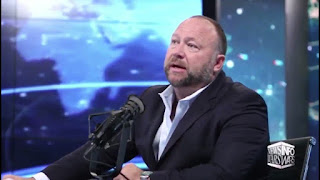 Media Action Center set up this simple letter writing campaign to the Federal Communications Commission in response to Jones' hoax over the Sandy Hook school shooting (read below and on the side for details.)  As a result, many stations have simply taken Jones off the air.

It will take a real letter, as the FCC only accepts emails from corporations (not kidding.)

If ever there was a time to stand up to the radio corporations for integrity on our airwaves, it is NOW.