FCC: Enforce the Hoax Rule on Alex Jones - Radio Stations: Take Him Off the Air! 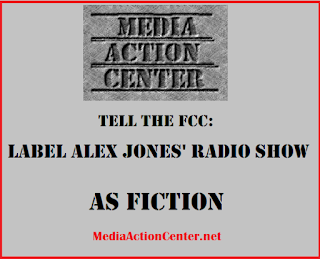 Was the Sandy Hook School shooting faked by advocates of gun control? Were the people we saw crying over slain children actually actors? Were the kids themselves actors?
Of course not. But Alex Jones has said this so many times on his broadcast radio program that some listeners who believed this hoax began attacking the grieving parents, in some cases forcing them to move miles away from their homes (and childrens' grave sites.)

Let's work together to put an end to this so-called "News" which is destroying our democracy!

The Federal Communications Commission has a rule against broadcast stations airing hoaxes unless they tell listeners in advance the show is fiction.  But they will only act if persons living in Jones' listening areas send a complaint letter (not an email) to the FCC.
Find out if you live in an area where Jones broadcasts by looking at the list at https://www.mediaactioncenter.net/2018/09/us-radio-stations-airing-alex-jones.html . Find a station in your general area, then click on "Coverage area" to see if you are inside the circle.
If you are in range of a station broadcasting Jones' hoax filled program,
THERE ARE THREE WAYS FOR YOU TO TAKE ACTION:
FIRST, DOWNLOAD THIS LETTER TO SEND TO RADIO STATION MANAGEMENT.  Personal contact makes a difference. After sending the letter, seek to make an appointment to meet personally with station management to talk about Jones' hoaxes and the station's responsibility to your community. (You will find station information on the Jones' stations list . You will need to look up the name of station management.)
NEXT, DOWNLOAD THIS LETTER TO COMPLAIN TO THE FCC. It details specifically what Jones has said on the radio regarding the Sandy Hook shooting hoax and other dangerous hoaxes, and outlines the FCC rules against such hoaxes. Just print it out and fill in the necessary information. You will need to include your local station's call letters and Community of License, found in the list of Jones' stations.
Please send the letter via US Mail to the FCC (its mailing address is on the letter.)
It is a lot to ask people to send snail mail letters, but while big corporations get to email their information to the FCC, the agency requires We the People to mail a letter with a stamp.
Not kidding. This is the only way we can get media justice. Send a copy of this complaint to your station management so they know you have made a complaint.
THIRD, WRITE A LETTER TO THE EDITOR OF YOUR NEWSPAPER.
Also please email sue@mediaactioncenter.net to let us know you have sent a letter so we can monitor what happens, and potentially file license challenges if the FCC and stations refuse to act. Any questions? Just ask.
Since this action began, local radio stations have simply taken Jones off the air in many communities. Your local voice matters!
Again, here is the letter to send to your local radio station:
https://docs.google.com/document/d/1w6MjhPGSzh1IJUYQfuh-3UVBlWUhpbk5takKXlV4xpk/edit
Here is the letter to the FCC:
https://docs.google.com/document/d/1L-tUJAGLuBsMwxFd7g8seS8MlckJ_JnTfrbdEZHaQBI/edit
Questions? Email us at sue@mediaactioncenter.net and we'll try to help.

Thank you for being a part of restoring facts and truth to these United States of America.