What can We the People DO to restore integrity to media? 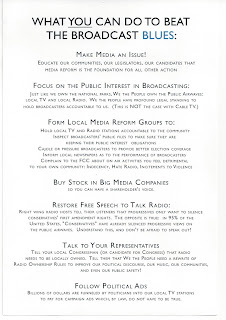 When Media Action Center toured the nation with  Broadcast Blues in 2011, we inserted this short list inside our DVD cover so people could take action.

We have already achieved some milestones:

Media is now an issue.

They can't kill people on the radio and remain licensed to broadcast.

Let's advise those in government what steps they can (and must) take on our behalf.

STEP 1:   RESTORE THE RIGHT TO RESPOND

The Fairness Doctrine, which the Federal Communications Commission threw out in 1987, said broadcasters must provide a "reasonable opportunity for the discussion of conflicting views." When that simple opportunity vanished, so too did civil discourse.

What we need now is to restore the simple Right to Respond.  If a radio or TV host attacks someone personally, that person should have the right to respond, to defend themselves on the same program where they have been attacked.  If a radio or TV show spends hours promoting one political viewpoint, someone else should have the right to respond, if only for a few unfettered minutes, in that same time slot. This is a simple way to provide true discourse, and it really is only common sense.

HOW TO ACHIEVE THE RIGHT TO RESPOND:

1. The FCC could simply create a new rule. However, as the leadership of the FCC changes with each new President, a different President's FCC could just eliminate that rule. There is a better way:

2. Congress could pass legislation making the Right to Respond a law, not a whim.

Pioneering broadcasters recognized the imperative to democracy that many voices have access to microphones on our publicly owned airwaves. They found Congress agreed and quickly developed rules through the FCC that allowed one company to own no more than 3 AM radio stations and 3 FM radio stations nationwide. Over time, these rules relaxed so by Reagan's administration, one company could own 20 AM stations and 20 FM stations.

Then in 1996, the Telecommunications Act was changed so own owner could have as many radio stations across the nation as it could purchase, as many as eight stations in a single town.  In small communities, that means they get only one local radio news voice. In Minot, North Dakota, we learned how emergency alerts about a poisonous chemical spill did not get out to the town because the station was really being run from Texas, a thousand miles away. And in communities large and small in Everytown, USA, corporate radio stations blare Right Wing Talk Radio into homes, businesses and cars, and refuse to allow any other point of view on the air.

In 2020, the Federal Communications Commission itself sued a community group striving to limit the number of local TV stations allowed to a single owner in a single town, even though the 3rd Circuit Court of Appeals has ruled against the FCC on this issue since 2004. That case, FCC v Prometheus Radio has now reached the Supreme Court.  While Communications Law prohibits any one TV station owner from reaching more than 39% of the nation, the FCC's scheme would allow one corporation to potentially own the local newspaper, two network TV stations, a third or fourth non-network TV station, plus eight radio stations - all in the same community. It is not hard to imagine what damage would be done to democracy when a single nefarious owner could absolutely control all the messaging to a single town. Then multiply that scenario into cities and towns across the country, and we have a nightmare situation where disinformation prevails and independent local voices are entirely excluded.

HOW TO CREATE MORE OPPORTUNITIES FOR LOCAL VOICES

1. The FCC could simply create new rules disallowing such high concentrations of broadcast ownership within a single community. However, as the leadership of the FCC changes with each new President, a different President's FCC could just eliminate that rule. There is a better way:

2.  Congress could pass legislation opening up the limited market of radio and TV stations to more entrants, not fewer. Congress has long abdicated its supervisorial communications role to the FCC. It is time for our Representatives to take its power back (and restore the peoples' voice back to We the People.)

STEP 9: GIVE TEETH TO LICENSE CHALLENGES